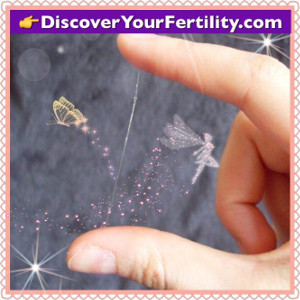 What does it mean when you observe the Spinnable Cervical Mucus? Was your Ovulation already or yet to come? Find it here in the Article.

However, often around ovulation, many women observe a high level of water in the cervical mucus, which then leads to a spinnable and distensible cervical mucus.

Can one improve the cervical mucus?

First of all, at this point it’s best to accept your cervical mucus as it is. Working with the pharmaceutical industry’s miracle drugs on cervical mucus is usually not a good idea, because as a fertility expert, I have gained great respect for natural cycle and fertility. For example, a woman with PCO became pregnant despite 100 days of cycles in the first attempt with the Symptothermal Method without medication. Before Symptothermal Method, she tried unsuccessfully for several years. Before you do anything, you should do a cycle diagnosis, otherwise you wouldn’t know what is lacking in the cycle. In the worst case, unfortunately, I feel it again and again, women are destroying their natural cycle. They take the means (funds) to help themselves without knowing what is lacking and it’s very dangerous.
There is nothing wrong for a woman to support and improve her cervical mucus naturally without medication. Here, you can increase the water content in the cervical mucus, for example, you drink more water. At least 2 litres per day is recommended. But there are other ways to improve her cervical mucus. I have revealed more information on the details in the article “Improving Cervical Mucus”.

Spinnable cervical mucus after ovulation-ovulation over?

The first thing that comes in mind is whether the woman asking this question really knows when she will ovulate. Unfortunately, ovulation calculators and ovulation tests are not reliable enough to limit ovulation. Similarly, a woman who observes only her cervical mucus in the cycle can’t get a precise answer to this question.
Finally, cervical mucus alone isn’t a sufficient indicator to determine whether or not you have ovulation. For this reason, you can’t infer that ovulation has occurred because you’ve seen spinnable mucus once or several times during the cycle. Therefore, it’s impossible to evaluate with only cervical mucus if the spinnable mucus was observed before or after ovulation.

Thus, it can’t be seen from a cycle with several mucus phases with spinnable mucus, whether ovulation is over.
In the Ovulation phase, there may be several spinnable mucus phases. This is particularly the case with PCO syndrome, endometriosis, postpartum pills and breastfeeding. Cervical mucus usually changes much before ovulation and is therefore mainly used to limit the appearance of fertile days in the cycle.

Ovulation can only be clearly determined by measuring the Basal Temperature in combination with the Cervical Mucus. 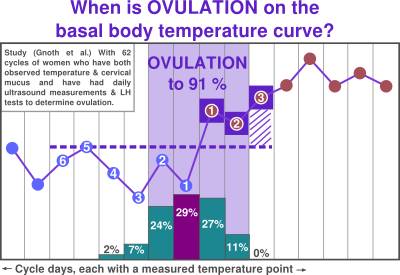 Shortly after ovulation, basal temperature, which you can best measure each day with an appropriate Symptothermal Method thermometer, usually increases. With the measured basal temperature curve in combination with the cervical Mucus, it’s possible to clearly determine when and if ovulation occurred in the cycle (see graph).

Before ovulation or rise in temperature, the spinnable cervical mucus usually forms on the mucus. This may also be the case several times during different days of the cycle and is very often observed after the cessation of hormonal contraception due to artificial hormones. Spinnable cervical mucus can occur even after rises in temperature or after ovulation. However, this is usually the case shortly before the onset of the new menstruation, as the body releases the excess mucus from the cervix before menstruation. This cleaning process has nothing to do with ovulation and is completely natural. In addition to the Basal Temperature, the breast symptom is an interesting sign of the end of ovulation. This can give you extra security. If you want to immediately start measuring the temperature, we recommend our Get Pregnant Starter Set, with which many women have naturally got pregnant.

Therefore, we strongly recommend this: Measure your Basal Temperature and observe your cervical mucus. You can then use the Symptothermal Method to answer the question of how fertile are you? For this I have written an eBook “when I am fertile? “ in which you will find a step-by-step introduction to the Symptothermal Method with exercise cycles and solutions. Likewise, in the second chapter, you’ll get information about cycle diagnostics, which will help you enormously to determine any possible cycle specialization within you. In the third chapter, you will find 15 motivating testimonials of pregnant women via very difficult conditions. 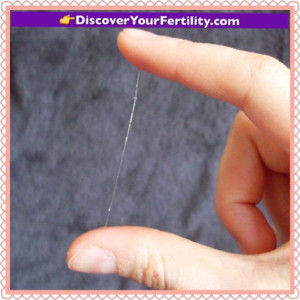 Spinnable cervical mucus and get pregnant?

The cervical mucus can’t tell you if you’re pregnant. Spinnable cervical mucus is not an indication in this regard. However, after the first 12 weeks of pregnancy, there is the so-called white flow which can also produce fillable liquid mucus. However, most women even undergo a pregnancy test to find out if they are pregnant. Women who measure their Basal Temperature during their cycle can clearly see on the temperature curve without pregnancy test that they are pregnant. How it works is explained in detail in the eBook.