Ovulation calculator – are they really that good? 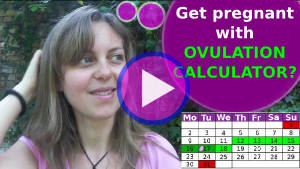 Ovulation Calculators – Are they really that good?

In this article, you’ll learn everything about ovulation calculators. Is it possible to calculate the fertile days and thus become pregnant more easily?

How does an ovulation calculator work? 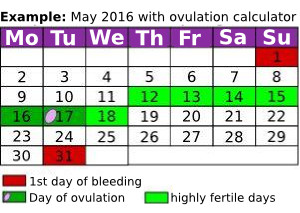 Fertility indicator from the ovulation calculator 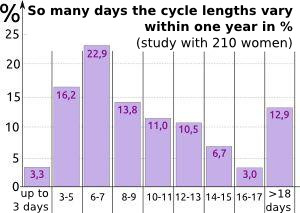 Women running a menstrual calendar will have already noticed that their cycles are not always the same length. In fact, studies show that the cycle length in most women varies by 6 to 7 days (22.9%). Even differences in cycle length of 18 days are not uncommon (12.9%). Now it is clear that, with fluctuations alone, an indication of the average cycle length does not make much sense. Because the woman just can’t know how long her forthcoming cycle will last – and the ovulation calculator, unfortunately, won’t either.

Fluctuations in the ovulation period

Now many women will say that I have a totally regular cycle and that I can get along with the information of the ovulation calculator. But now it’s coming! Ovulation is not always 14 days before menstruation. Ovulation is about 10 to 16 days before the next menstruation, according to examinations with ultrasound. In concrete terms, this means that ovulation can vary greatly even at the same cycle length. In our example, ovulation could be already in the interval from the 15th day of Cycle to the 21st Cycle Day. That’s madness, isn’t it? Consider that the 19th – 21st Cycle Day is even outside the fertile period we calculated with an ovulation calculator at the beginning. But that’s not enough, it gets worse. 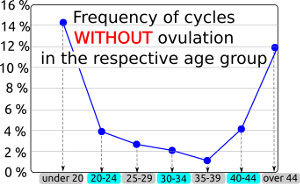 Well, and now there’s the fact that there doesn’t have to be any ovulation at all in a cycle. Yes, many people do not know that, but there are also cycles in which no ovulation takes place at all. These cycles occur more or less frequently depending on age. Under the age of 18, this phenomenon even occurs in 15 percent of cycles, as well as becoming much more likely from the age of 40. But even in the period between 35 to 39 years, such cycles can occur. And the ovulation calculator what does it do? It just gives you a flat-rate ovulation and a very fertile time, because it just always assumes that you have an ovulation.

Experts believe that cycle peculiarities are not so rare at all. It is estimated that about 5 to 10 percent of women have PCO syndrome (PCOS for short). This means that they sometimes have extremely long cycles of about 100 days and then in the next cycle again short cycles of 25 days. If such a woman uses an ovulation calculator to calculate the fertile days, the chance of guessing correctly and getting the ovulation is about as good as a winning the lottery.

Now there is the possibility that a woman regularly has ovulation, but the corpus luteum does not produce enough progesterone to build up the uterine lining sufficiently well. As a result, even a fertilized egg can no longer settle into the uterus and grow into a baby. With an ovulation calculator we would only calculate into the blue ovulation and the women, would still not get pregnant, if the calculator is fortunately correct, because the eggs cannot settle in afterwards. Especially with the luteal insufficiency, it is important that a woman can really determine exactly her fertile days in every cycle. After all, research shows that there can always be cycles in which the woman builds up the uterine lining sufficiently well and you can then get pregnant despite luteal insufficiency.

Conclusion: Ovulation calculators are scrap – the Symptothermal Method is top

So I have already given you at least five reasons why ovulation calculators are simply not suitable and, in my opinion, are unfortunately a waste of time. Clearly, it is very easy and practical to enter the data into the calculator – but if the result of the fertility indicator was so reliable – then you wouldn’t read this article here. Then, as a fertility coach, I would be out of work and I would not need to write those words for you. Then, as a fertility coach, I would be without work and I would not need to write those words for you. The Symptothermal Method is absolutely awesome compared to ovulation calculators because the Symptothermal Method works no matter how long your cycle is – no matter how strong your cycle fluctuations are – whether your ovulation is 10, 12 or 16 days before menstruation. And there is a simple reason for this. The Symptothermal Method does not try to calculate the fertile days on the basis of the average cycle length, but always to determine in the current cycle with the help of ovulation signs such as cervical mucus and basal body temperature. These ovulation signs emerge as a result of the most important sex hormones that control the female cycle namely estrogen (cervical mucus) and progesterone (basal temperature). And that’s why with the Symptothermal Method, you can find your true fertile time, as in any cycle. But the best is yet to come, you can also do diagnostics with the Symptothermal Method. That means you can use the Symptothermal method to find out specifically if you’ve had an ovulation in this cycle. Or whether you have a Luteal Insufficiency or PCOS and then treat it naturally and find out if the treatment is effective. From my point of view, ovulation calculators are an absolute flop and I can say in good conscience – please keep away from it. Please use the Symptothermal Method, because this method is scientifically tested and has been shown in studies to increase the pregnancy rate. My wife got pregnant twice using this method.