Your Natural Fertility is Stronger Than You Think 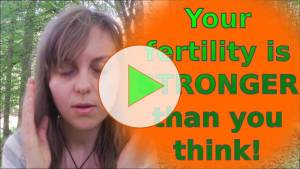 Your fertility is stronger than you think

Your natural fertility is stronger than you think! Why many couples get pregnant naturally after a long wait with the Symptothermal Method and other natural methods, I’ll show you in this article.

Can one naturally become pregnant even with a long unfulfilled desire for children? To this end, I would like to tell you three child desire stories and substantiate about how I come to say, “The potential of natural fertility is much greater than you think!”

The first story is about the sister of a good friend who was childless with her partner. She was told by doctors that she can’t get pregnant naturally. As a result, the couple used reproductive hormone therapy and got twins due to this! Now the couple was very happy and happy with two children, and it was clear they will not be preventing in the future. The reasons were clear. Firstly, they have heard from their doctor clearly and repeatedly that they can not naturally get pregnant. So the probability was very low – at least if you believe the doctor treated you. Secondly, in the unlikely event that they, however, find a child by natural means, they would welcome them with open arms and full of love. And, what happened? Today the couple has six (!) Children – four of them have, of course, been conceived and that is despite the infertility diagnosis! This case clearly shows that reproductive medicine is not always the very last way to have children and doctors can also be wrong in their assessment.

I would like to share with you the story of Anett Breczko, whom we already interviewed on this blog. Anett has had an unfulfilled desire to have children for many years and tried numerous methods of reproductive medicine including IVF, ICSI, insemination and many more unsuccessfully. Finally, in her early 30s, the doctors gave her the infertility diagnosis! “She should no longer have high hopes for a desired child,” she was told at the time. To distance herself from that diagnosis, Anett went on holiday and came back pregnant. Two years later she became pregnant again naturally – on holiday and thus got two desired children by a natural means despite the “infertility diagnosis.” Currently, there are no studies to prove that holidays increase the pregnancy rate. However, it must be said clearly that stress has a huge impact on fertility. A Study of over 400 women showed that only four in 10 study participants exposed to stress during the fertile days became pregnant. In women with persistent stress, the number of pregnancies was even lower. Many people can relax better on vacation and less stress, which is good for fertility. This applies to both women and men. Consequently, it could not be a coincidence with Anett that she got pregnant twice on holiday.

Child Desire-Story 3 – pregnant thanks to the Symptothermal Method

The third child desire story is about a couple who came into our course and wanted to get pregnant. Before the course, the couple had been trying unsuccessfully to get pregnant for about 5 to 6 years. Shortly after completing the course after about three months, the couple then wanted to try the modern methods of reproductive medicine. About a week before the first treatment appointment at the fertility center, she found out that she had naturally become pregnant thanks to the Sypmtothermal Method. Again, one cannot speak of chance, because scientific Studies have clearly shown that the Symptothermal Method can significantly increase the pregnancy rate. It soon became clear in the course that the fertility optimum was often not correctly determined for the couple. After all, she learned from her gynecologist that you can measure temperature to determine the fertile days. However, she measured under the arm because her doctor did not have time to mention that only mouth, vulva or buttocks are suitable sites. Only in the course did she learn that she has an ovulation and when she is fertile. The man also changed his behavior and screwed down the cigarette consumption. Fertility awareness has generally been positively strengthened. The course brought the couple even closer together. If you also want to start with the Symptothermal Method, I recommend our  eBook “When am I fertile?” – with which you can learn the Symptothermal Method in 30 days.

Of course, there is no 100% pregnancy guarantee with any method. However, it has to be said that the couples declared infertile are not exceptions and we have experienced this very often in our courses. Doctors are also just human beings and they can be wrong. This has been shown by the child desire stories and you could tell many more. The potential of natural fertility is greater than you think – this sentence can be scientifically confirmed. For example, in 2017, nearly 200 women that had been attempting to become pregnant for at least one year and up to a maximum of 8 years without success took part in a Study. On paper, these are clear cases for reproductive medicine and so it comes as no surprise that some of these couples have even had some unsuccessful treatment with reproductive medicine. Likewise, almost half of the participants were over the age of 35. So they really weren’t easy cases. According to today’s doctrine, the majority of doctors would no longer recommend natural pregnancy in these cases. In the studies, pairs of expert advisors were instructed on how to use the Symptothermal Method to determine the fertile days. As a result, a staggering 38% of women have become pregnant after 8 months. Without the Symptothermal method – one calculated cumulatively from the pregnancy rate in the first cycle – only about 21% of couples would have become pregnant naturally. This shows that the use of the Symptothermal Method has nearly doubled the pregnancy rate. Equally astonishing – the study found that a shorter waiting period had a positive effect on the pregnancy rate. For couples from the study who waited for only one to two years for their desired child, even 56% of couples successfully became pregnant. If one compares these figures with reproductive medicine, after IVF or ICSI about 30% of women become pregnant and according to the IVF Centers in Austria about one in four women loses the child again as a result of miscarriage or other complication. It is already important whether fertilization and implantation have taken place naturally. Because with natural pregnancies, a better baby take-home rate is to be expected than in reproductive medicine, i.e. usually not one in four women lose their baby here. Currently, modern methods of reproductive medicine are the first way couples in Germany take treatment to get pregnant if it hasn’t worked out after half or full year. However, scientists conclude that the Symptothermal Method would be the first meaningful measure for all couples with unfulfilled desire to have children. According to the latest research findings, it must be said clearly that 6 to 12 months of cycle observation with the Symptothermal Method may well be worthwhile. On the one hand, you have a chance to get pregnant here without medication and unpleasant treatments. On the other hand, the documented cycles with the ovulation signs, cervical mucus and basal temperature can be used for cycle diagnostics and thus to limit the causes of the unfulfilled desire for children.

In this sense, I wish you all the best on your way to the desired child!