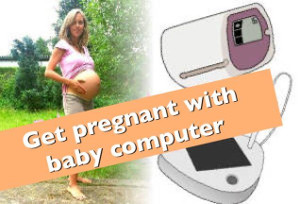 Which Fertility Monitor is the best? The ultimate comparison of several monitors like Clearblue to determine the fertile days to get pregnant.

What are the pros and cons of a Fertility Monitor compared to the normal Fertility Awareness App and much more in this article.

What you need to know about Fertility Monitor!

To date, the Stiftung Warentest has published only one comparative study dating from 2000. However, this study clearly shows three things. Firstly, there are significant differences in the quality of Fertility Monitor -especially to determine the fertile days. Secondly, there are basically two types of computers, one being the temperature or the Symptothermal Computer, which determine the fertile days according to the measured temperature. On the other hand, there are Hormonal Computers that limits the number of fertile days of the cycle based on urine hormone testing (LH tests). The study revealed that temperature computers are significantly better than Hormonal Computers. Thirdly, no computer is as efficient as the handwritten Symptothermal Method which determines the fertile days according to strict rules based on body temperature and mucus observation. She beats (Symptothermal Method) the Fertility Monitor of all categories and was out of competition. We also have the study director of numerous Studies Prof. Dr. med. Freundl interviewed, who commented as follows:

“Firstly, it must be said that the Cycle Computers are programmed based on the Temperature or the Symptothermal Method and so doing, can never be safer than these methods. The Computer is advantageous when the user isn’t familiar with her cycle and the rules, then the Computer can support her in her evaluation.”

I can clearly agree with that of 2017 as well. Nevertheless, a lot has happened since the study of 2000, – Especially in terms of operations, seizure options and the fertility algorithm. I would like to discuss these innovations and studies as well as new Fertility Monitor models in the following paragraphs. Models I absolutely can’t recommend -I shall not list them here.

The Ladycomp is a Cassy Temperature Computer that determines the fertile days according to the measured temperature. In the only comparative study of the Stiftung Warentest in 2000, this has not been as effective. There, he reached only the score of 4.2 in the desire to have a child milieu- since he did very poorly precisely in limiting the fertile days. What’s the problem? The Ladycomp shows the fertile (green) days, possibly the fertile days (yellows) and the infertile days (red). After evaluation, the yellow computer included more than 60% of the days of the cycle as fertile. Well, according to this fertility indicator, you can theoretically get pregnant almost every day-because the computer doesn’t help you much. Just what it’s able and supposed to do-indicate the fertile days, this may be insufficient and the Babycomp is therefore not the first choice. This is due to the fact that the temperature changes markedly after ovulation and is therefore not the optimal sign of fertility for the desired child. The most important parameter for the desired child is the cervical mucus peak, because it changes significantly before ovulation-but the computer does not save this setting. With a price of about 545 euros (from March 2019), I must say that the Fertility Monitor is more than overpriced. The cost-benefit ratio is not balanced. The Ladycomp hasn’t changed much in terms of design and operation for 17 years, but at the time, it did quite well and the look is definitely always the best on this Fertility Monitor. Short questions: Why is this computer very expensive? Where are the many testimonials on the net that have got pregnant with the Ladycomp? So far, I only know a few women who have used this computer to get pregnant-Therefore, do not recommend it as a first choice.

The ClearBlue Fertility Monitor is a classic Hormonal Computer that determines the fertile days based on morning urine tests. Many hormones are tested, including LH (luteinizing hormones), which greatly increases according to scientific studies shortly before ovulation bleeding and is therefore suspected of triggering ovulation with about 100 other hormones. The ClearBlue Fertility Monitor has been successful in convincing studies and achieving a higher pregnancy rate. In a study in 2007, 22.7% of women became pregnant after two cycles, compared with only 14.4% of couples without a computer in the second cycle. The service was judged positive and easy by 90% of the study participants. At just under 100 euros, the ClearBlue Fertility Monitor is very economical at first. But there are follow-up costs for the ClearBlue urine hormones tests each month-which cost at least 30 euros (from August 2017). I am currently seeing the computer in the second place because it’s just a better one.

In my opinion, Cyclotest myWay is currently the best Fertility Monitor for children. The previous cyclotest 2 plus model obtained a score of 1.8 in the Stiftung Warentest study in 2000 concerning children. The operation and design have improved considerably compared to the previous model. I particularly like the fact that the cervical mucus can be entered next to the temperature. Likewise, this is the only computer on which you can visualize your temperature curve, which gives you at least an approximate overview of your position in the cycle. I have been testing this computer for over 11/2 years now and can recommend it only if you can afford to spend more time to get pregnant. Finally, it will take about 3 to 6 cycles to the computer for the fertility indicator to display values similar to those of the Symptothermal Method. Even with longer cycles over 45 days or highly irregular cycles such as in shifts or after stopping the pill, the computer is not recommended because it has its weaknesses. But most women have a cycle that lasts about 23 to 35 days, in this context, the Cyclotest myWay works well. From operational and design view point, I am thrilled with the device which is really very successful. With a little less than 300 euros, the Cyclotest myWay is already an investment that you must consider, but I also know women who have become pregnant thanks to the Cyclotest myWay. So I can recommend it to others.

What a Fertility Monitor can’t do and why is it worth using Fertility Awareness?

Despite all subsequent developments, Fertility Monitor remains the second best choice compared to Fertility Awareness. Compared to Fertility Monitor, the Symptothermal Method (Fertility Awareness) has been much better studied so far. The Symptothermal Method was more than convincing in studies-in healthy women, about 81% of couples are pregnant after 6 months with this method-with 60% without Fertility Awareness. But now this comes: If the method is studied in a Fertility Awareness course by a qualified fertility counselor, it can even help couples after a long waited period for their desired child, as I explained in detail in my article ‘’Get Pregnant after a long waited period”. With Fertility Awareness, the most fertile days and ovulation bleeding can be limited to a few days-more accurate than any available Fertility Monitor today.
However, in my opinion, the main disadvantage of Fertility Monitor is different: The documented cycles cannot be used for cycle diagnostics. This means if you do not get pregnant after 6 to 12 months despite the Fertility Monitor, you can’t know why. The device purchase was therefore totally free. This cannot happen with the Fertility Awareness -the cycles documented in an App or cycle sheet can be used to isolate the possible causes of the unfulfilled desire to have children. I diagnosed a luteal insufficiency and got pregnant twice during the first cycle with a Fertility Monitor that wasn’t working. It would not have worked for me because my luteal phase was too short to implant a child into the womb. I could have had as many cycles of optimal circulation in the fruitful time. But thanks to Fertility Awareness, I knew what was wrong and I successfully treated the luteal insufficiency and Hashimoto in a practical way, then I became pregnant with a single sexual intercourse during the very fertile period. Here’s my pregnancy cycle.

My pregnancy cycle with baby No. 2

Especially with the peculiarities of the cycle such as PCOS, luteal insufficiency and Endometriosis, the Fertility Awareness simply has the advantage that each documented cycle is both diagnostic and usable for diagnosis and subsequent procedures.

The best Get Pregnant Starter book 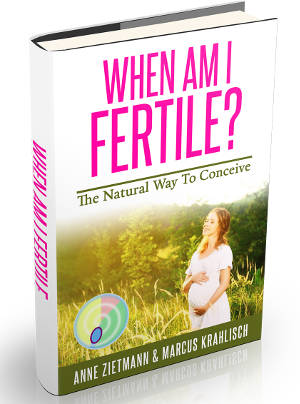 To be able to start as soon as possible to determine the fertile days with Fertility Awareness and to use this method for Cycle Diagnostics -I recommend our eBook “when am I fertile?” The natural way to the desired child “. Here you will find a step-by-step guide to the Symptothermal Method, 5 exercise cycles including solutions, useful YouTube videos on the main ovulation signs and 15 motivational testimonials from Fertility Awareness pregnant women. Cases of pregnant women are also reported despite the presence of PCOS, Endometriosis, luteal insufficiency, teamwork, chaos in the cycle after is stopping the pill and a bad Spermiogram of the man. So that you can integrate Fertility Awareness quickly and easily into everyday life. You will find our best tips in the eBook as well as tips on the applications and thermometers recommended in this book. Marcus and I have successfully followed a pedagogical training course in 2013 and since then, have successfully introduced the method to hundreds of couples and accompanied them to the desired child. We have taken two years to write this eBook and have put a lot of our knowledge and experience into this book, so we can really recommend it as a comprehensive Guide.