Get pregnant with Fertility Awareness after a long wait 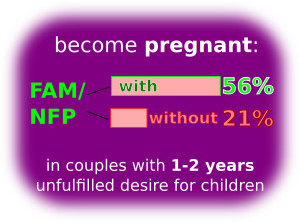 You’ve been waiting for your desired child for a long time? A new study shows how effective fertility awareness is to get pregnant – even for couples with a long time of waiting.

Most couples, of course, try to get pregnant naturally without a method. But what if it still did not work after 6 months or 12 months? Then most couples are referred directly to the fertility center after visiting the gynaecological practice – in some, hormone tests and sperm analysis test are made in advance. The result is nearly always the same in our experience: The couples are now to be “made pregnant” with reproductive medicine. The success rate of getting pregnant with modern methods of reproductive medicine is at a maximum of 30% pregnancy rate if one believes the studies linked in Wikipedia. The procedures of reproductive medicine are often psychologically and physically very stressful. But what if there was a natural way to get pregnant without side effects and of course even better chances? What if you could double your chances of getting pregnant from home even after a long wait? How that works, I’ll explain to you later in the article. 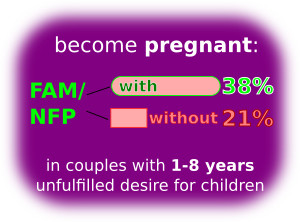 In February 2017 a new Study with 187 participating couples was published. All couples were not pregnant for at least a year and a maximum of eight years, despite their serious attempts. Unfortunately, some of them had already unsuccessfully performed treatments of modern reproductive medicine. The age of the women was between 21 and 47 years. On average, the couples had tried to get pregnant for about 3.5 years. About 48% of the study participants were over 35 years old. In short: From a conventional medical point of view, these couples were clearly something for reproductive medicine – they are referred to in the technical language as subfertile couples, i.e. couples in which the natural fertility is already severely restricted. But after 8 months of application with the Symptothermal Method, about 38% of the couples had got pregnant and looking at the couples who waited for only one to two years for their desired child it was even 51% which is really sensationally good!! Both pregnancy rates were well above the 30% pregnancy rate, which is maximally achieved with reproductive medicine.

Fertility Awareness doubles the chance of getting pregnant

The women measured their basal body temperature, each morning shortly after waking up and before getting up, for about 3 minutes according to the Symptothermal Method rules and transferred the readings together with the mucus into a cycle sheet or a suitable Fertility Awareness app. The basal body temperature increases significantly shortly after ovulation and usually continues to increase until menstruation or just before birth and can thus show when ovulation took place and whether one has got pregnant.

3. Learn the Symptothermal Method with the help of a specialist consultant/ technical advisor

All couples were accompanied by a trained specialist for fertility awareness in learning their fertile and infertile days and were accompanied in their quest for childbearing. The fertility consultant ensures the correct learning of the method rules and body observation. Of course, learning is really quick when you learn it in a course. In addition, a specialist consultant can look at the cycles and see the possible peculiarities, why the woman has not yet get pregnant. The Corpus Luteum weakness is frequently ignored, which can really be recognized very very well with the Symptothermal Method. Then the women can use the information from the consultant’s cycle diagnostics to work on their challenges and to increase their individual fertility and to specifically treat them. In this way, even difficult cases can often lead childbearing in a natural way.

How to learn the Symptothermal Method in just 30 days

Luckily, we live in the 21st century and today there are possibilities to take advantage of a professional consultation including email support from the comfort of your home. In our ebook „When am I fertile?” we show you step by step how you can determine the most fertile days during ovulation. The book Includes one chapter with a Step by Step introduction for the Symtothermal method a manual, 4 cycles including solutions and rules overview.

Although I myself, despite Hashimoto and Corpus Leutum weakness, have naturally get pregnant twice in the first practice cycle, the study surprised me very much. Especially in such difficult cases with such a long waiting period, as you probably did, I would not have expected that the Symptothermal Method will do so well. But the study shows once again that it is extremely important for you to know when you are fertile if you desire to bear children. This is the only way to optimally use your fertility and of course get pregnant. Of course, the study raises the question of why we still see conventional reproductive medicine as the No:1 Method in case of an unfulfilled desire to bear children – that was the conclusion of the scientists:

Training women to identify their fertile period in the menstrual cycle seems to be a reasonable, non-invasive and safe first-line therapy in the management of subfertility.

The role of expert advice is unfortunately completely underestimated. So far, only very few couples recognize the value of the cycle diagnosis, with which one can pinpoint and limit the causes of the unfulfilled desire to bear children. I myself have accompanied many couples in their quest for childbearing and have many touching success stories to share. In my opinion, the cycle diagnostic is an important key to success here – because it was often little things that prevented a successful conception.
Do you also want to increase your chances of getting pregnant significantly? Then I recommend my Get Pregnant Starter Set to use the maximum of your fertility potential.