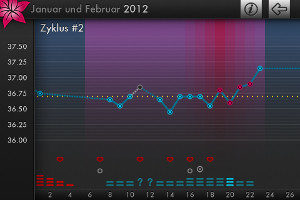 Pic 1: My first pregnancy cycle with the Lily app – still in the old Design back then (2012)

Can you get pregnant with the lily app? I’ve done it twice! My detailed test review of the Lily iPhone app.
Now I’m going to introduce you to my favourite iPhone app with which I got pregnant two times: Lily. Like any other cycle app, the description reads thus (AppStore description: “Lily is a remarkably simple and beautiful way to determine your own fertility during the cycle, the ideal way to learn more about your own body – reliably, discreetly and Absolutely private!“). But already when entering menstruation, Lily differs from the other countless cycle apps to determine the fertile days.

Design of the Lily app

Intuitive and easy input meets super beautiful design with individual color matching. Yeah! You’ve read it right – you can set your own favorite color as the main theme colour. I chose pink as the color in the settings and I find that it is very nice with the dark background. You can also adjust the latter to white, but I find the dark version more eye-friendly and also a little more mysterious. If something brightly shines, it feels so public – according to the motto: Here I am! Look at me! And which woman wants to show her private cycle publicly? OK – that was probably an own goal – I regularly blog my private cycles:D here. When I enter, I find that this creates a protected private atmosphere, which I very much appreciate. In any case, I find the design completely successful and it is a lot of fun to look at it. Take a look at the beautiful radiance of the colors in the screenshot above and see for yourself. 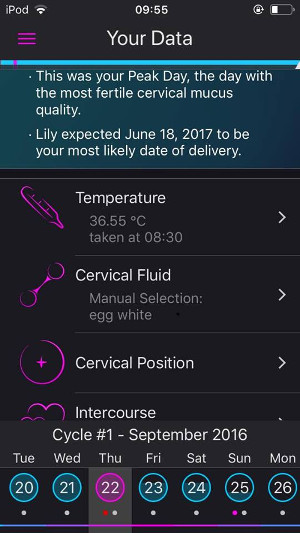 But you can’t get pregnant with a mega-awesome design. So Determining the fertile days is of course very important for a cycle app. I have looked at this in more detail and have entered my ovulation signs into the Lily app in the two cycles in which I wanted to become pregnant (February 2012 & September 2016). Lily indicated to me a fertile period both times and in addition the highly fertile days immediately before ovulation were marked with different colors. I got pregnant twice, each in the first attempt. The Symptotermal method, which Lily uses as the basis for the fertility indicator, I have been using myself since 2009 to observe my cycle and coach women to determine their highly fertile days. That’s why I know that Lily’s evaluation works very well – and because I’m actually lying in bed cuddling and breastfeeding with living evidence: our second baby! While writing this review with my iPod and baby in my arm, I think back of the days of my exciting child desire. When I entered my temperature readings and Cervical mucus observations into the Lily app. As I have always and repeatedly watched my pregnancy curve in the Lily app in disbelieve. What a wonderful feeling it was. Here I would like to show you my two pregnancy curves. The fertility indicator is only so good because it can be determined by the mucus documentation and temperature recording very precisely. This is the only way to really tell you when ovulation is. Please do not trust an Ordinary menstrual calendar App, of which unfortunately there are many in the AppStore claiming about indicating the fertile days beforehand with certainty. If the app does not explicitly states that it evaluates according to the Symptothermal method using temperature and cervical mucus, then I can only strongly advise against these apps – if you really want to get pregnant. Lily evaluates using the Symptothermal method – and is therefore absolutely recommended to determine the fertile days for getting pregnant. As you observe exactly the cervical mucus, measure the temperature and how you handle special features that can affect your curve, you can read in the Lily app – there are the rough facts, but if you want to know for sure and be certain about observing your ovulation signs correctly, I highly recommend to you our eBook “ When Am I fertile? The natural way to conceive” in addition to reading. In the Lily app, you can switch to the child desire mode to get more suitable information about getting pregnant in the cycle. 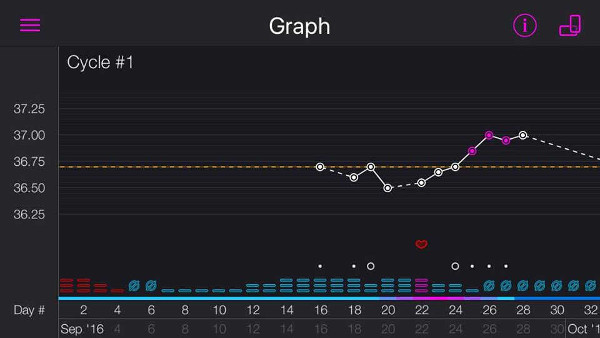 Special features in the Lily app

I didn’t think there could be so many useful and helpful settings in a Symptothermal Method cycle app. First, there is an assistant at the registration of the cervical mucus, which I consider to be very helpful for all women who are observing their cervical mucus cycle for the first time. This is not always so easy in the beginning if you have not had any experience in it yet. The assistant will systematically query the main things of the mucus observation and then automatically enter the right mucus category into the digital cycle sheet. For women who already have cervical mucus experience, they can also enter the mucus category manually – which is much faster than with the assistant.
Then there is a special reminder, which I also think is fantastic: You are able to remember both the temperature measurement and the cervical mucus entry from the Lily App. You can determine the time for this yourself and also the sentence that is displayed during the reminder, e.g. “Good morning! How hot are you today? Have a look at ‘D’“ or something like that. This keeps the fun of registering and above all you can not forget it.
I really appreciate the cycle being digital and trendy, but sometimes I also want to have something in hand to look at on real paper). Also, in this case, the Lily app is set up so that you can send the cycle of your choice as a PDF by email and then print it. Perfect! It works.

Input options of the Lily app

The Lily App is available in iTunes. With me, the installation worked without problems. It is much cheaper with this price compared to other iPhone apps.

Conclusion – Does the Lily app help you get pregnant?

Yeah, the Lily app can definitely help you get pregnant! I think it is a real support in the digital recording and evaluation of ovulation signs. As a small suggestion for improvement, I would like to mention that a technical bug can still be fixed because the app on my iPod occasionally goes down when I tap a view on a single cycle day. But I think that this can be fixed relatively quickly – so I can only comment positively on the Lily app.

Fertile Greetings to you from
Anne