Getting pregnant with the help of the cervix 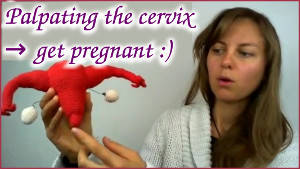 Video about Getting Pregnant with Cervix

Can the cervix help you get pregnant by showing the ovulation and your fertile days? Everything about checking your cervix and a lot more.

Can the cervix indicate ovulation?

Mouths opening wider each time – up until the ovulation, just as the cervix does. The cervix very slowly changes during the cycle. At the beginning it is hard and closed, but the closer the ovulation comes, the more it opens and becomes softer. Therefore, it is a direct sign for the very fertile days. The cervix is not able to indicate the ovulation on its own though. Do you really want to find our if the ovulation took place? In this case I recommend that you keep record of your cervical position in combination with your temperature in a suitable app or a cycle chart and analyse it according to the established rules of the Symptothermal Method. Nevertheless, the cervix, together with the temperature and the mucus, is one of the most important ovulation signs during the cycle.
Rule: Have sex on days with an open and soft cervix to get pregnant!

How can I check my cervix? 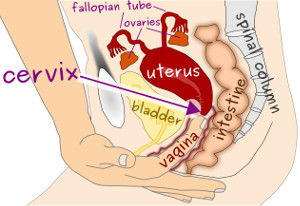 You can feel the firmness, the position and the opening degree of the cervix with your finger. To do so, you take a position in which you feel most comfortable to check your uterine neck. For most women squatting is the best position, as you can reach your cervix best like this. Always use the same finger for checking; most women use the middle finger as it is the longest one. Put your finger into your vagina and you will be able to feel the cervix, which feels like a small nub. This nub can be open or closed and feel soft or hard. You can write that down in a cycle chart or a suitable fertility awareness app! To practice you can start touching your mouth with your finger. When it is closed you feel a small slit and when the mouth (or cervix) is open, you feel a hole – considering your mouth this would be like saying the letter “o”. A hard cervix feels a bit like the tip of your nose, while a soft cervix feels like your lips. In addition to the firmness and the opening degree you can also monitor the position. You can find a detailed explanation about how that works in my eBook. In the beginning you can just skip the position and only write down open/close and soft/hard though.

Cervical mucus vs. cervix – Which is better?

There is no general answer to this question. It is certain that you can use the cervical mucus as well as the cervix in combination with the basal body temperature to determine your fertile days. Therefore, in this respect both methods are equal. Monitoring the cervical mucus is a bit more work, because you keep record of the best mucus with the best quality throughout the day – meaning that every time you use the toilet, you can keep track on how the mucus changes during the day. When monitoring your cervix, you only have to feel the position, firmness and opening degree once a day at the same time and with the same finger. This is definitely a temporal advantage in comparison to the mucus. Most women though think that the cervical mucus is easier to evaluate and interpret, which is why up until today only about 10% of women use the cervix. For cervical mucus the Billings method and the cervical mucus method are traditional methods to determine fertile days solely based on the mucus. There is nothing similar for the cervix – although it would be possible in theory.

When is the best time to start monitoring your cervix?

Of course, you can start monitoring your cervix whenever you like. From our experience though it is easiest to begin around the time of the ovulation, which is when the cervix is open and soft. The cervical mucus is usually spinnable at that time. After all the difference between a soft cervix before ovulation and a hard and closed cervix after ovulation is usually quite distinctive and easier to feel for women who just started observing their body.

Can the cervix indicate menstruation?

One to two days before menstruation the cervix usually feels soft and open again. This is because the body prepares for the start of the menstruation, which means that the bloody endometrium finds its way out through the neck of the uterus, the cervix and finally your vagina. From our point of view, it is hard to define when the next menstruation will begin based on the change of the cervix. However, if you use other body signals in combination, usually you can get quite a clear picture that you can analyse with some practice. Many women for example experience pain in their breasts after the ovulation which normally can persist until the menstruation.