Period Overdue – Am I Pregnant Now? 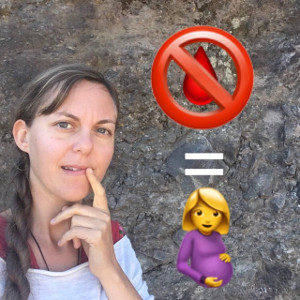 Your period is overdue and you want to know if you are pregnant? I’ll show you how to safely diagnose pregnancy.

Missing your period is one of the most common signs of pregnancy. As soon as the period is overdue, women worry if they are pregnant. This can happen once after a contraceptive failure, where the period is overdue despite a condom or after a copper IUD. There is also the possibility that a couple has been waiting for their dream child for a long time and now wants to know whether it has finally worked out. Whatever your reason, the basic question remains the same. How can I quickly and safely find out if I’m pregnant when my period is late? For this reason, in this article I would like to show three different ways that you can clearly and unambiguously determine pregnancy.

Is my period really overdue?

Scientists around the world have long wondered how long the cycle normally is. For example, a study was carried out in Heidelberg with 1,600 German women who submitted a total of 35,000 cycles. The result was that the natural cycle can vary between 23 and 35 days for most people. The typical 28 day cycle that is typical under the pill could only be observed in 13% of the natural cycles. Another study of over 600,000 cycles showed that the average cycle length is around 29 days.

Use a menstrual calendar

Every woman who keeps a menstrual calendar can document the range of fluctuation in cycle length herself. In this way, you know exactly how much your individual cycle length fluctuates within a year. Let’s say you use a menstrual calendar to determine that your cycle length fluctuates by 9 days over the course of a year. So is it an indication that you’re pregnant if your period is three days late? No of course not. Should you be alert if your period is more than 10 days late? Yes of course.

Individual fluctuation range of the period is crucial

Delayed Period – 3 ways to determine if you are pregnant?

It’s important to be aware of the options you have at hand to quickly and effectively diagnose pregnancy.

Before pregnancy occurs, the following happens. The ruptured egg fuses with a sperm in the fallopian tube. The zygote – fused egg cell with sperm – then moves from the fallopian tube to the uterus for about a week and then implants itself in the lining of the uterus. From the time of implantation, the hormone hCG is produced in the preliminary stage of the placenta. The hCG concentration increases rapidly from this point and doubles daily in the first trimester. A pregnancy test measures the concentration of hCG in the urine and is positive above a certain threshold concentration.

Period overdue – which pregnancy test is the best?

Now we know from studies that the implantation of the zygote in the uterus takes place between the 6th and 12th day of the cycle. On the one hand, there are highly sensitive pregnancy tests that show positive results from an hCG concentration of 10 mIU per ml. On the other hand, there are also normal pregnancy tests that only indicate pregnancy from a concentration of 25 mIU per ml. Studies have clearly shown that a highly sensitive pregnancy test is positive on day 9 after ovulation at the earliest. A normal pregnancy test, on the other hand, only shows pregnancy from the 12th day of the cycle. The general rule:

A pregnancy test can only determine a pregnancy from the 13th day of the cycle after ovulation. It does not matter whether the SS test has a concentration of 10 or 25 mIU per ml.

I would always clearly recommend a *highly sensitive early pregnancy test, as this can usually indicate pregnancy earlier. If you really want to be on the safe side, you should only test from day 13 and preferably with a *digital pregnancy test. This clearly shows with the words PREGNANT whether you are pregnant or not and does not allow any speculation.

Surely you have already noticed that you really only know exactly when a pregnancy test will be positive after ovulation. So it depends on the timing of ovulation. The problem here is that nobody can predict the large fluctuations in cycle length and therefore also not when the next ovulation will be. So it’s not that easy to figure out when a pre-period SS test is positive. For this reason, ovulation must be determined with certainty. This works best with the NFP method, which can also be used to reliably determine pregnancy without a test. If you also want to use NFP, I recommend my eBook “WHEN AM I FERTILE?”, where I give you step-by-step instructions on the NFP method including exercise cycles + solutions.

#3 Blood test at the gynecologist

Please go to a doctor if you suspect you are pregnant

In any case, I would always recommend that you visit a gynecological practice if you suspect a pregnancy. After all, in the case of pregnancy, you only get a maternity pass, which is used for numerous official processes such as e.g. B. maternity leave is crucial. Watch out for other signs of pregnancy In general, a positive pregnancy test is usually not the first and only sign of pregnancy. Tenderness in the breasts, morning sickness or a pull in the groin are often observed.

Period late despite negative test – is that possible?

Can the period be late despite a negative SS test? Yes, of course this is possible. There are numerous reasons that can cause menstruation to be delayed or absent. We would like to list the most important ones here:

Stress can definitely be one of the reasons cycle length shifts. One of the most impressive cases told me by a student who had 40-day cycles in the semester just before exams. During the semester break, however, their cycles were only 23 to 27 days long. Consequently, exam stress was so influential that it was able to increase cycle length by more than 10 days per cycle.

Actually it’s logical. Suddenly eating less food can lead to a deficiency. The same also applies to great physical exertion such as competitive sports. Perhaps not enough hormones are being produced to keep the natural cycle going. For this reason, diets, eating disorders or competitive sports can lead to a missed period and cycles without ovulation.

#3 PCOS and other cycle disorders

With a PCO disease there are cysts in the ovary, which can slow down egg maturation in the ovary. As a result, women with PCOS often have very irregular and long cycles. This means that cycles can easily occur in which the period seems overdue. However, long cycles are not an indication of infertility and so I have already accompanied many women with PCOS to their desired child, even during long cycles. You can find out more about this in our article: “Getting pregnant with PCO – That’s how it works!”

During menopause, a woman’s body undergoes hormonal changes similar to those during puberty. The woman’s natural cycle, which is intended for reproduction, is disappearing more and more as a result of this change. It is therefore completely normal for irregular and long cycles to occur during menopause. Menopause is complete when the last menstrual period in a woman’s life, also called menopause, occurs.

Other reasons for the absence of menstruation

It’s difficult to list all the reasons for missed periods in one post. Here there is e.g. B. also the JETLAG, which can occur after a longer trip to other countries. Such a temporal and spatial change can also have an influence on the cycle. According to the latest studies, the corona vaccination can also influence the course of the period. It is clear that the period can also be overdue if you are not pregnant. Conclusion Women trying to have children are happy when their period is overdue. There are often other signs of pregnancy. In my opinion, the easiest way to diagnose pregnancy is with a highly sensitive early pregnancy test. It is even better if you use the NFP method. Here you can determine ovulation and the fertile days in the cycle, as well as determine a pregnancy without an SS test. The most reliable proof of pregnancy remains a blood test or ultrasound in a gynecological practice.

Is your period really overdue?

However, most women panic or overjoy much too early, since the period is usually not overdue at all, but simply ovulation has been postponed. Studies clearly show that 46% of all cycles can be delayed by more than 7 days and 20% of cycles can be delayed by more than 14 days. Thus, for most women, overdue is simply a natural fluctuation in their menstrual cycle. quote at the end I would like to end with a quote from the well-known American author Nikki Tajiri who once said:

“The truth is I cannot love being a woman if I hate my period.”

Unfortunately, most women still have a bad relationship with their menstruation and cycle. For example, they hate that the menstrual cycle is unpredictable like clockwork. You can find out more about this topic in my article: “Bad mood during the period – what to do?” The cycle is like a snowflake However, women who use the NFP method usually have a good relationship with their cycle and menstruation. They realize that the menstrual cycle is like a snowflake, with no two cycles alike. I have already documented over 100 cycles with the NFP method and seen countless cycles from clients and have found that every cycle is unique without exception. However, the most important cycles for me personally remain my pregnancy curves 🥰 📈. With this in mind, I wish you all the best on your way to having a child.