Pregnant Despite Period – Is that possible? 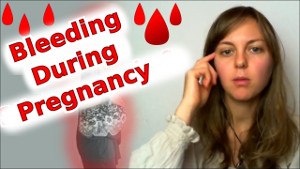 Can you be pregnant despite period? Yes, it’s possible – I’ve experienced it and would like to tell you about my experiences in this report.

There are numerous articles on the Internet claiming that you cannot get pregnant – if you get your period and that in this case, it must definitely be an implantation bleeding. But these articles are not entirely accurate, because I can really justify it beyond doubt on my pregnancy cycle and show that I had my days even though I was already pregnant. How this is possible and what you need to consider for your baby, I explain to you in this article.

My pregnancy cycle with a period

My pregnancy cycle began with my regular menstrual bleeding on September 1, 2016, which is simultaneously the 1st Cycle Day. Then, based on my basal temperature curve, with the help of the Symptothermal Method rules, one can see that my ovulation took place near the temperature rise around the 23rd to the 26th cycle day. My first higher measurement of basal temperature was on the 25th cycle day. About 10 days after the first higher measurement, my bleeding started at normal strength like the menstrual bleeding, also the bleeding pattern matched what I was used to from my menstruation. Also, an implantation bleeding can be ruled out, as such bleeding takes place about 5 to 7 days after ovulation and I was already at least 9 days over it according to the Symptothermal Method rules. Now that both the strength, bleeding pattern and timing were right – I assume it was my real menstruation.

My Pregnancy Cycle with for my 2nd Baby

How did I know That I was pregnant despite period?

As you can see, my temperature stayed up and I could almost certainly say that I got pregnant. In fact, my temperature went even higher. Then I did pregnancy tests from the 37th Cycle Day and each test showed a clearer result – Juhuu I am pregnant?

Why do I still get my period during pregnancy?

I wondered that, too. There are various theories on this, all of which have been disputed so far. Some scientists assume that some women get their periods because there may be some kind of body memory. Thus, the body thinks that it would be time again for the period despite the fact that fertilization took place. Another theory is that there may be severe hormonal fluctuations even in the luteal phase – which can lead to a similar period to bleeding. Bleeding in pregnancy can also still be triggered by infection bleeding as well as contact bleeding during sexual intercourse. I was able to rule both out as I had no signs of infection or sexual intercourse near these periodic bleeding around the 35th Cycle Day. In my particular case, I assume that I had a hormone fluctuation of the hormone progesterone due to my luteal insufficiency and consequently a hormone fluctuation, which is why bleeding ultimately occurred.

Are the bleeding dangerous for the baby?

#Basically, it can not be said that bleeding in the pregnancy cycle is automatically dangerous for the baby and can cause a miscarriage. After all, implantation bleeding, which results, for example, simply due to a slight injury in the lining of the uterus during implantation is rather harmless. Nevertheless, bleeding is also a warning sign, as it can of course also be a sign of strong hormonal fluctuations and an unstable luteal phase. So it can not hurt to clarify bleeding during pregnancy in a gynecological practice. In my personal case, I already had signs of luteal insufficiency in the previous cycles and therefore knew that I had to look at how I will optimally support my body.

How could I keep my pregnancy despite period?

Since I myself have luteal insufficiency and Hashimoto, I have taken my period bleeding very seriously. After all, in the case of luteal insufficiency, it is not uncommon that the uterine lining is simply not built up well enough and thus bleeds earlier than planned or that too little progesterone can not completely hold the uterine lining. So I knew that I could give my body something to help hold the child better. In the book by Margret Madejsky, I read that folic acid is very important here. So I took folic acid in early pregnancy to help my body and my baby. That worked very well for me. However, I do not know whether it would not have worked out without the additional folic acid. After the periodic bleeding, I have twice experienced a mild short-lasting bleeding in week of pregnancy 6 + 8 and since then no bleeding and my baby has remained. The cycle and temperature stabilized – everything is going according to plan so far. I’m currently in week of pregnancy 29.

How often does bleeding occur in early pregnancy?

Bleeding can occur relatively frequently in early pregnancy. In various Studies, scientists were able to detect bleeding in about 7 to 24% of participating women in the first weeks of pregnancy. However, even periods of heavy bleeding occurred much less frequently. In the linked studies, bleeding in pregnancy comparable to the period was only observed in 8% of women. Most often, bleeding occurs between the 6th and 8th week of pregnancy.

Yes, you can get pregnant despite the period and stay pregnant. Basically, bleeding is in most cases harmless to the baby. This is especially true for weak intermenstrual bleeding, such as implantation bleeding. In the case of periods of heavy bleeding, however, one should look more closely at the causes. Luckily, I did Fertility Awareness before and knew I had luteal insufficiency and that I have to help my body a little bit. Likewise, despite this bleeding, I recognized the pregnancy in the first place, because the breast symptom remained despite the period and the temperature was elevated and even rose again. Without fertility awareness, I probably would have thought I wasn’t pregnant and might not have been able to respond optimally to my bleeding and hormonal fluctuations. So I have get pregnant for the second time with the help of the Symptothermal Method and am now looking forward to a relaxed further pregnancy and natural birth. If you want to learn the Symptothermal Method as quickly as possible, I recommend my Get Pregnant Starter Set. In this set, everything has been put together and explained so that you can get started right away.