Get pregnant despite shift work 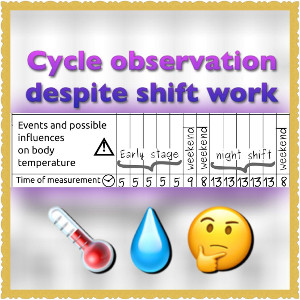 Get pregnant despite shift work, how does it work? Learn how women get pregnant via shift work despite irregular cycles.

Despite irregular cycles and shift work, can I get pregnant using the Symptothermal Method? I often get asked this question as a fertility expert. The answer to this question is purely YES. I’ve accompanied many women despite shift work and irregular cycles. In this article I’d like to show you how to determine your fertile days despite shift work and complex cycles. Here, it’s important to understand what makes the shift work cycles so complex and why they may be more difficult to evaluate. At the end of this article, I will outline a real-life pregnancy cycle of a woman with shift work who has get pregnant with the Symptothermal Method and under my monitoring.

What are irregular cycles?

Many women believe that you have irregular cycles when the cycle does not have 28 days or the cycle length isn’t constant. In fact, the 28-day cycle is a myth that only occurs 11% in natural cycles. In general, normal cycles vary between 23 and 35 days. So we would really talk about irregular cycles if a cycle lasts for more than 35 days or less than 23 days. This is usually not the case for most women, unless they have a PCO, a chaos after the pill or another cycle peculiarity. Most often but not the case. Even shift work can lead to irregular cycles with cycle lengths over 35 days as a result of the shift work. This isn’t a problem because Symptothermal Method works for every cycle length. It doesn’t matter if a cycle lasts only 15 days or 100 days. This is another reason why many and more women use the Symptothermal Method, especially with PCOS, shift work and cyclic chaos. Many cycle computers and Apps do not respond to irregular cycles. In the package leaflet, you will often find information that the devices are not designed for cycles longer than 45 days or less than 11 days.

Do you always have to measure the Basal Body Temperature at the same time?

Does the Basal Body Temperature automatically disrupts when measured at different times?

It’s not that easy. From studies, there are women whose measured Basal Body Temperature is more sensitive to measurement time than others. However, most women have little effect on the evolution of the Basal Body Temperature curve, with a time difference of one to two hours. This is individually very different.

What should I do if the measured values of my Basal Body Temperature Curve are disturbed? 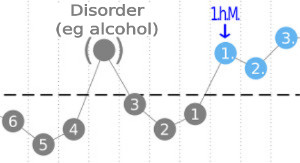 In fact, it’s almost normal for a woman to suffer from Basal Body Temperature disorders. You often get sick and have a fever or stay awake for a party and get up late the next day, etc. You 2 often recognize the disturbed temperature values because they differ markedly from the usual low
position. Dealing with this, is very simple, the disturbed temperature values are recognized, excluded and NOT taken into account in the evaluation to determine fertile days.

Although you have excluded these disturbed values, you still get enough undisturbed temperatures values together so as to determine the fertile days. In a 9945-cycle study, disturbed temperature values due to measurement time were observed in about 20% of the cycles. Nevertheless, in these cycles, with the current Symptothermal Method rules in more than 95% of cycles, the fertile days could be determined. This study also looked more closely at the women’s cycles in shift work. After all, fertile and
infertile days could be determined in about 80% of the cycles. This study is already very old and, in my opinion, the number of evaluable cycles are much higher today. This is partly due to the fact that today, we have Basal Body Thermometers like the iButton, which can automatically measure the temperature overnight at a fixed time. In this way, the circadian rhythm can usually be outsmarted in critical cases. This usually allows for a very nice evaluable curve, even with shiftwork.

On the other hand, shift work special rules have been developed and only known by trained fertility counselors, which also allows to evaluate a difficult temperature curve during shift work. These rules can be found well explained for example in our new bonus eBook “determining fertile days during shiftwork” “, which is in our eBook “when I am fertile? “. Thirdly, there are also Basal Body Thermometers that can store up to 60 temperature values, including time and date. This makes the documentation much more accurate and easier than it was 20 years ago. This technological and methodological development makes the Symptothermal Method highly recommended, even for shift work and irregular cycles. To date, no computer or cycle App can reliably evaluate such cycles. After all, a computer can’t automatically detect a defect, nor are the devices’ algorithms identical to the Symptothermal Method. Thus, it’s not surprising that many
manufacturers require a regular lifestyle or that temporal measurement intervals for basal body temperature are strictly prescribed. Until now, we’ve been able to help all the women we’ve accompanied, in almost every cycle, despite shiftwork, to determine the fertile and infertile days.

Now, we’ve accompanied many women on the path to their desired child despite shift work with Symptothermal Method. Below is the cycle of a real woman who learned the Symptothermal Method with our video course. Now. I’d like to call her Babara, because she wants to remain anonymous. Babara kindly provided her cycle on how to get pregnant despite shift work, so that I can present it here and comment on it:

Babara got pregnant with Symptothermal Method in the 7th cycle. Although Babara has very different measurement times, little has to be excluded in the cycles. Most of the time, Babara had early shift in this cycle and measured her Basal Body Temperature between 5:00 and 6:30. However, on January 13, 2019, she measured it 8:00 a.m. and the value was significantly increased. As already explained, she simply excluded this value. Nevertheless, she was able to determine the fertile days in this cycle. The difference of 1 1 /2 hours in the measuring time had no major impact
on her. Babara is a living example of how a different measurement time in Basal Body Temperature doesn’t always automatically lead to an unevaluable Basal Body Temperature curve. 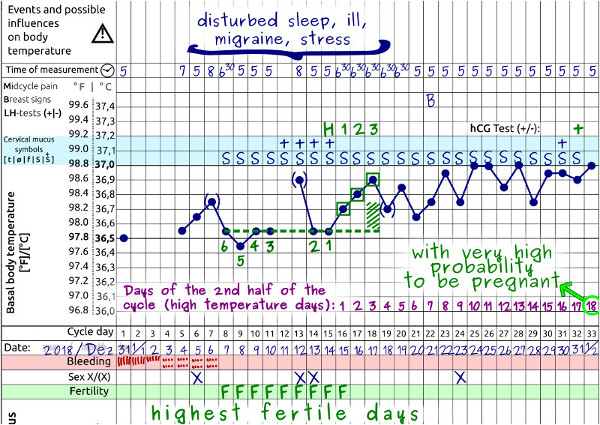 In this pregnancy cycle, the 1st highest measurement was on the 16th cycle day. Ovulation was close to the first highest Basal Body Temperature measurement. Cervical mucus also peaked near the first highest measurement on the 15th cycle day and confirmed that the other days around 14th, 15th, 16th and 17th cycle day are ovulation time. She had the last sexual intercourse on the 13th and 14th cycle day, as sperm can remain fertile in the woman’s body for 3 to 5 days, which was optimal for a pregnancy. Babara’s biggest wish was to have a very special pregnancy cycle and that’s how it turned out. Finally, her cycle showed a triphasic pregnancy temperature curve with three temperature levels, in which the Basal Body Temperature curve rises slightly as the temperature increases. You can see the second rise from the 23th Cycle Day. As we have already mentioned in another article, with a triphasic temperature gradient, the chances of getting pregnant is slightly increased. That’s how it came about and Babara was able to present her positive pregnancy test to me. If you want to start with the Symptothermal Method right away, I recommend our Get Pregnant Starter Set to get started right away. In this set, I’ve summarized the key elements needed to apply the Symptothermal Method quickly, correctly and effectively.

What can we learn from Babara’s cycle? Yes, it’s possible to use the Symptothermal Method despite shiftwork to determine the fertile days and actually get pregnant.

Studies have shown that women who wish to get pregnant with the Symptothermal Method are 81% within 6 months, compared with 92% after one year. Without Symptothermal Method, women averaged only 60% at 6 months and 85% at 12 months. So you have to plan for a year before you get pregnant, of course. Babara fits into this statistic because she became pregnant in the 7th cycle. We can also see from Babara’s cycle that not all women with shift work notice a big impact on temperature. As with many women, the differences in measurement times of one to two hours doesn’t matter much. Of course, there are different cases here, but the Symptothermal Method can actually be used in all women with shiftwork.

Cycle diagnostics helped Babara a lot, because that’s how we were able to see the things in her life with huge impact on her cycle. The stress reduction program, a proper diet and much more have improved her cycle and fertility. I was particularly impressed with the triphasic cycle, which can’t be seen as often in a pregnancy cycle. Of course, one can’t infer from one case to the general public, but this case shows the incredible potential of natural fertility and its observation. In this sense, I wish you all the best on your way to the desired child.