How can I improve my Cervical Mucus? 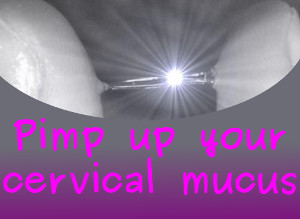 How can I improve my cervical mucus to get pregnant easily? Here, you’ll find five (5) ways on how to optimize your mucus quality.

Women who are trying to get pregnant would love to know and understand everything perfectly. They would like to do everything possible to get pregnant as soon as possible. Many are aware that cervical mucus plays a vital role in getting pregnant. Of course, it’s obvious that this should have the best possible quality. However, firstly, to be able to determine if the quality of your cervical mucus is enough to get you pregnant and what criteria to be taken into account, I will explain below.

Is my cervical mucus OK or could be improved?

The very first question that comes in mind is: How do you come up with this idea that your cervical mucus might not be OK? And if that was really the case, how do you know if it needs improvement? First of all, as soon as you can observe your cervical mucus, you’re also likely to become pregnant. The cervical mucus is basic and has the task of protecting the sperm from the acidic vaginal medium and feeding it so that it can stay in the woman’s body to ovulate. Sperm are fertile in the cervical mucus for up to 3 to 5 days. The best quality of individual mucus may vary from one woman to another and from one cycle to another; It does not usually play such an important role. You’re already fertile from category f, so if you can feel the cervical mucus at the vaginal entrance but can’t see. The best mucus quality is category S +, where you can observe wet, transparent and spinnable mucus at the Vulvina entrance, for example. The difference for semen in these categories is little more than fast food (category f) and a 5-star menu (category S +). You need to look for a real “mucus improvement” If you can’t feel or see mucus in the cycle, or if you can’t determine the fertile days in the cycle based on the rules of Symptothermal Method due to mucus chaos. But in most cases, the cycle also presents other symptoms, such as shortened luteal phase -so that cycle diagnostics is often not limited to the cause of cervical mucus. My assessment of this subject as a long-term fertility expert is as follows: In almost all cases, the cervical mucus production -as present individually-is optimal for a natural pregnancy. However, the cervical mucus and its quality can be influenced from the outside. I’ll show you how to do it.

Fertile mucus consists of a high proportion of water. Especially during the fertile days around ovulation, many women can observe watery, spinnable and transparent mucus. A very logical and simple measure to improve cervical mucus is simply to drink sufficient and pure water. Of course, water is the best drink here as its better absorbed by the body and suitable for almost all processes in the body. The quality and conditioning of the water you drink also plays a vital role. For example, water in plastic bottles may make it infertile due to plasticizers. The ideal would be to drink spring water in the form of glass bottles, although this isn’t always possible. A good solution is to drink water from a good filtration system (reverse osmosis filter). The third option is simply to drink natural mineral water from glass bottles. The amount of water absorbed also plays an important role. Nutrition experts recommend drinking about two to three liters of water a day. I can gladly convey this recommendation from my experience.

Since cervical mucus is made up of a large proportion of water, all beverages that removes water from the body aren’t conducive to fertility and cervical mucus. There are also many studies on the subject that lifestyle and coffee consumption in particular can have a major impact on fertility. The medical journal states the following:

“In addition to smoking, alcohol, obesity and social deprivation, a heavy coffee or tea consumption was one of the five lifestyle factors which extended the time to become pregnant by more than a factor of 7 in a highly regarded study (Fertil Steril 2004; 81: 384 92). “

Now, there are many teas for the desired child in the market, indicating that they can improve fertility. So far, my experience on this subject is much divided. Unfortunately, I’ve experienced quite often that fertility is not supported optimally by a constant intake of tea for the cycle or for fertility. It may even happen that the cycle is completely destabilized and that the pregnancy becomes even more difficult. For example, a woman with very good panic cycles because she didn’t get pregnant after four months, starts a cycle with tea. This contained, among other things, a mixture of women’s coat and monk’s pepper. Of course, like many women today, she did it without the proper advice of a health specialist or whatever. Thereafter, her cycle was destabilized, the temperature curve was visibly agitated and the elevation to pregnancy was too short. Unfortunately, I have often had to do such experiments, so I can clearly advise you against taking sweetened tea. In my opinion, this topic should be addressed through nutritional counseling, curative treatment or traditional Chinese medicine, which specializes in the desire to have children. From the perspective of Symptothermal Method, a cycle diagnosis should be performed prior to the application of special teas taking a look at the cycle progression of at least two consecutive cycles. If something is noticeable on the cycle, you can treat it by taking therapeutic teas, massages or other healing treatments, and thus have a positive effect on fertility. If the treatment of the cycle as well as cervical mucus accompanied by experts such as a doctor, naturopath, nutritionist or a therapist in traditional Chinese medicine (TCM), I’ve above all a positive experience on the use of teas to improve cervical mucus.

Increasing fertility or cervical mucus through nutrition is a separate topic. In my book “when am I fertile?“ I described in the bonus section of the eBook “healthy diets for the cycle” which foods are beneficial for the cycle in a healthy woman. Of course, it must be ensured that the diet of the first half of the cycle supports estrogens production, which is directly related to the production of cervical mucus. The more estrogens you produce, the better the quality of the cervical mucus. However, estrogen promotion in the first half of the cycle-i.e. before ovulation- as it’s only at this stage that ovule maturation and cervical mucus formation are favoured. After ovulation, the corpus luteum develops from the follicles formed as a result of the ovule maturation. The corpus luteum is a separate gland that now produces progesterone. After ovulation, progesterone-promoting foods becomes sensible. Now it’s clear that you can hardly feed optimally without Symptothermal Method-since you don’t know what cycle phase you’re currently in. It’s more common for women to consume estrogen-or progesterone-based teas, fertility and food, and disrupt the natural course of the cycle. By applying the Symptothermal Method and knowing the appropriate diets that supports the cycle phase, you therefore have the advantage. However, you don’t have to intervene if you have a good natural cycle. In my opinion, you should really change something only if the natural cycle has abnormalities, such as a shortened luteal phase or a long-lasting phase that is considerably prolonged, frequent cycles without ovulation, etc.

So far, there is no scientific evidence that grapefruit juice can improve fertility or cervical mucus. However, there are women who have done self-experiments with their cervical mucus on YouTube showing an improvement in the quality of the cervical mucus. There are countless comments confirming this stance. Personally, I can’t tell if grapefruit juice can improve cervical mucus. I haven’t tried it yet. However, grapefruit juice is very healthy and contains a lot of vitamin C which, like all antioxidants, increases fertility. Looking at women’s digestive process, one could already establish a link between the grapefruit juice. As a general rule, the nutrient-supplied blood circulates in the liver. The liver forms important enzymes, called cytochromes, which promote the degradation of toxins. A special cytochrome is the CYP2A4, responsible for the destruction of steroid hormones including estrogens. Grapefruit juice contains antibodies (furocoumarin) that are absorbed by the blood and sent to the liver. Due to furocoumarin, the formation of CYP2A4 is blocked and the body can no longer decompose estrogens. Thus, the oestrogen remains in the body and the level is increased in the short term for a few hours. Estrogens are the main hormones responsible for the production of cervical mucus. According to this theory, it would be quite possible for grapefruit juice to improve the quality of cervical mucus. In my opinion, grapefruit juice is healthy and can’t disturb the desire for children, so it’s worth trying.

The team of the American scientist Jerome H. Check discovered in 1982 in a study that cervical mucus could be improved by dissolving cough with the active ingredient guaifenesin. Unfortunately, I’ve not been able to find any further studies on this subject. However, there are testimonials from women’s forums attesting by cough solvers and claim to have become pregnant via it. The well-known website Babycenter.de has written an article on the subject-which says, the ingredient guaïfésin dilutes the cervical mucus. The mucus solvers which one must not forget, are not really there for this purpose, but rather for the solution of constipation and bronchial cough. Now that the mucus solver acts on all mucous membranes in the body to the same extent, it can also make the cervical mucus thinner. In some cases, these effervescent tablets, applied on an appropriate cycle day, may indeed have a positive effect. Many women also swear by the ACC cough solver with acetylcysteine – there are many testimonials on this. Nevertheless, the BabyCenter page only recommends the active ingredient guaifenesin and equally recommends, for medical reasons, the compatibility with the desire for children of other active ingredients. Of course, it’s always advisable to consult a doctor before taking any medication.

The cervical mucus is undoubtedly the most important ovulation mark to get pregnant, because its quantity, appearance and consistency changes significantly before ovulation. However, the cervical mucus alone can’t tell if ovulation has actually taken place or is over. This can only be achieved with the Symptothermal Method by combining the mucus with the measurement of basal temperature during the cycle to determine the fertile and infertile days.