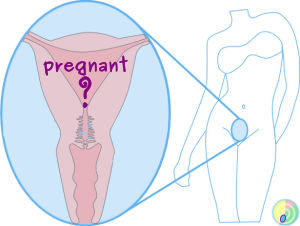 How Can You Know If You’re Pregnant? The 11 Most Important Signs of Pregnancy, Explained Quickly and Clearly

You often hear about women who didn’t know that they were pregnant for a long time, or even until shortly before giving birth. How can that be, when there are such obvious signs of pregnancy? Is there too little information available, or do these women just have too little awareness of their bodies? Either way, they’re real-the definite signs of pregnancy. Body awareness is the only way to notice that you’re pregnant quickly. With my own experiences, which I’ll write about here, I want to help women to recognize their pregnancies more quickly. In the process, I want to give women with planned pregnancies a few tips for dealing with the different signs of pregnancies.

I think it’s clear, that there must have been a least one instance of intercourse between man and woman to get pregnant 😉

Usually, the absence of menstruation is the first sign of pregnancy that women notice. However, something interesting happened that I hadn’t foreseen. On the days of my cycle when my menstruation normally would have started, it felt exactly as though I was having my menses, but they weren’t there and didn’t come. The feeling lasted for 4 to 5 days and was weaker towards the end, exactly like my menstruation usually is.

It’s well-known that the strong hormonal changes during a pregnancy can change your emotions. At the end of the 6th week, I had an unexpected attack of crying during a popular ice dancing show. I’m not sure what the trigger was-it was just so beautiful to watch. In that moment I knew that something had changed in me. If I wasn’t pregnant, it wouldn’t have happened to me, that much was certain. 😉

Tip: Just to be on the safe side, always have a handkerchief with you!

Another clear sign of pregnancy is the breast symptom – a painful feeling of tension in the breasts. The breasts are noticeably harder and somewhat larger. In the natural cycle (without taking hormones), the breast symptom occurs very reliably in most women shortly after ovulation and remains present until the next menstruation. But in a pregnancy, menstruation doesn’t happen, and so the breast symptom stays somewhat longer. For me, the breast symptom continued until the end of the 3rd month-I thought that it would never stop. Every day and every minute, these signs of pregnancy reminded me that I was pregnant, until I could hardly think of anything else. A relaxing bath and soft massage can alleviate these aches. Besides that, it’s very important to wear breast-friendly clothing and a bra that fits very well. A bra that fits badly could make the pains worse-which brings me to the next sign of pregnancy.

A bra that fits well is especially important during pregnancy and nursing-it will give support to your back and avoid negatively influencing the growth of your breasts. Around the end of the 3rd month, all of my bras were too small. Only a single bra fit me after another month. An increase of one to three cup sizes is completely normal during pregnancy. This sign of pregnancy can be easily noticed by outsiders, as well as by your partner. 😉 To really find the right bra size, you can read my article here.

My constant tiredness mostly led to the potential for conflict in my relationship in the first three to four months. It didn’t matter whether I had woken early or slept until noon, I was always exhausted after dinner. I could have slept all day. My partner couldn’t quite understand that a couple of hormones could have such an enormous effect. He wanted so much to do something with me or simply watch a film in the evening, but I almost always fell asleep part way through the film. Ample breaks during the day can help, as well as a more extensive midday nap. Unfortunately, most working pregnant women can only dream of having one!

Due to the increased hormone value of progesterone (Latin “for the pregnancy”), pregnant women need to go to the bathroom more often. I was awake almost every night because I needed to go to the bathroom. Sometimes, it helped to drink a lot during the day and then not at all one to two hours before going to bed. This sign of pregnancy is good training for nightly nursing!

Luckily, I was spared from vomiting and extreme nausea at the beginning of my pregnancy. Despite that, I had some light to moderate nausea from time to time in the first three months, usually directly after eating, and once during a long train journey. Later, around the 4th month, I often felt ill while brushing my teeth-such a gag reflex can be really unpleasant. I had it more or less under control by thinking of other things while I brushed my teeth, in order to distract myself. For example, you can listen to radio or audio books while brushing your teeth. Some women also find it helps to switch toothpastes.

No woman had told me about this sign of pregnancy, but I had it nonetheless-a very painful strain of the round ligaments of the uterus in the lower left and right abdominal region when I sneezed. It was really extremely painful and I thought every moment that something had torn internally, especially when it lasted for five minutes after sneezing. The round ligaments of the uterus have to stretch a lot, and when you sneeze, they’re overstrained, so to say. I found a little trick to avoid this pain. As soon as I noticed that I would have to sneeze soon, I would bend my legs, pulling my legs to my body or, if I was standing, bending forward. In this way, the ligaments of the uterus couldn’t be overstrained when I sneezed and I had no more pains.

I wasn’t very aware of this sign of pregnancy myself, but my partner often talked to me about it. He found it very unusual that I would often go in the wrong direction on partially known routes or start to go into the wrong subway station. My tip: Save unknown routes and public transportation routes on your phone, and always have a navigation system or a capable friend with you in the car. In an emergency, you can always ask someone: “Sorry, I’m pregnant-can you tell me the way to…..?”

My increased appetite was also mostly noticed by my partner. Before my pregnancy, I was usually very undecided about what I wanted to eat. My partner was astounded at how I now knew exactly what I wanted to eat. He even laughed about it a little, but really was very happy about this sign of pregnancy, because the endless discussion about “What do we want to eat tomorrow? – Um, I don’t really know…” had temporarily come to an end.

Other Signs of Pregnancy (That I Didn’t Notice, But Many Women Do)